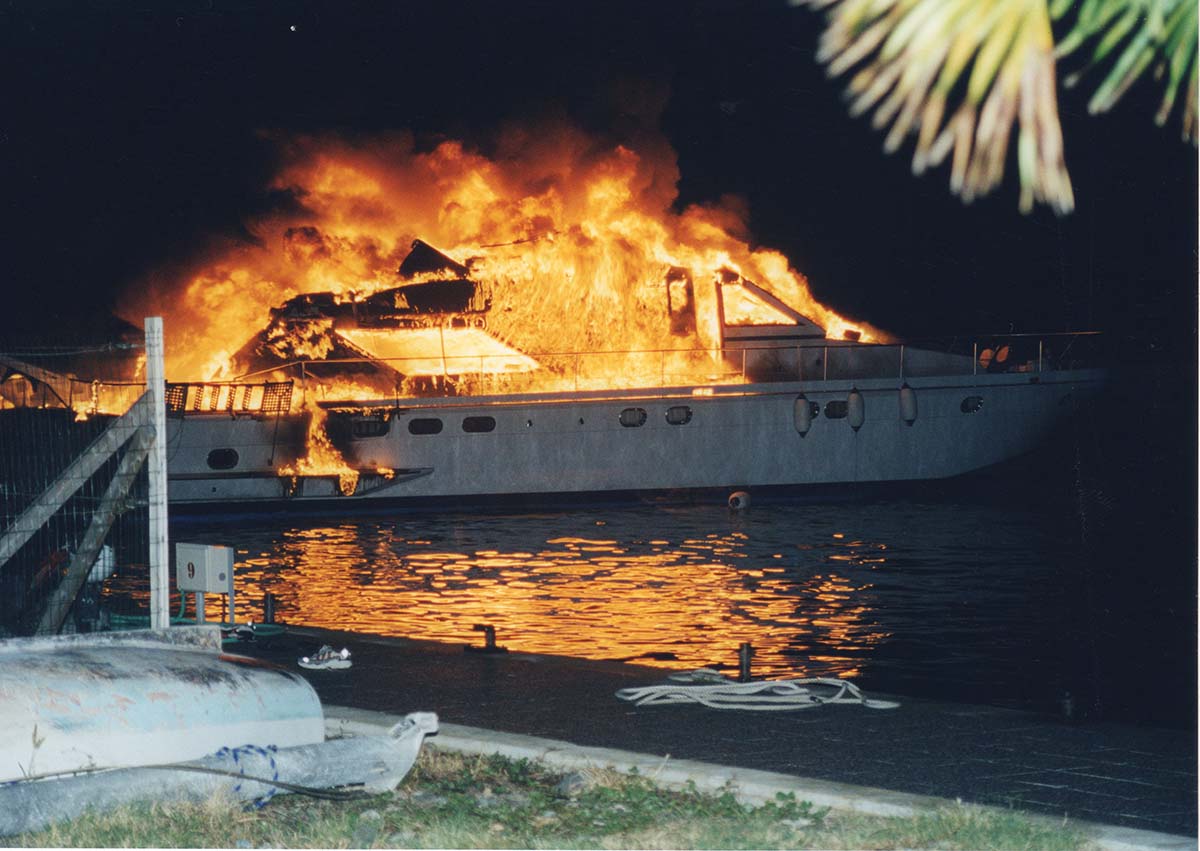 Editor’s Note: This article is the first in a two-part series focusing on marina fire prevention. The second article will be published in the March 2023 issue of Marina Dock Age and will cover some of the fire scenarios marinas can face and how to prevent catastrophes from occurring.

The subject of marina, boatyard and/or shipyard fire is a complex one. It is a marina owner’s worst nightmare. Imagine receiving a call in the middle of the night from the local police or fire department. Your marina, boatyard, or dock is fully engulfed in flames. Or, worse yet, you are working on a project at the boatyard and a fire erupts and you cannot control it and within minutes, your entire livelihood, something you and your family worked to build for perhaps decades goes up in smoke and ashes. This is a real threat. It happened recently at Mattapoisett Boatyard in Massachusetts. A fire originating in one of the shops quickly spread throughout the entire facility and at the end of the day, generations of work had been wiped out.

So, let’s take a deeper dive into why there is a heightened risk of fire at a marina or boatyard, what can be done to mitigate those risks, and how to respond in the event that your worst nightmare becomes reality.

The Risk
Like black powder in a musket, boatyards are pre-primed for a fire event. Think about it. Where do you have such highly combustible materials as resin, catalysts, acetones, thinners, paints, fuels, woods, building materials, and plastics all combined with ongoing mechanical and electrical operations, paint and finishing operations in spray booths (or outside – come on, be honest, you do it), fueling operations, battery storage and charging, and even shrink wrapping.

Add to that the simple changes in how boats are stored has increased the risks of a disaster tenfold. In the past, boats were hauled and side-tracked. That term meant that after the railway hauled the boat on the cradle car, the boat was side-tracked down a set of rails to the side of the main railway. By design, boats were several feet, if not a yard apart. Then the modern-day straddle-lift was born and as boats were moved and cradled them, they were at least a straddle-lift leg apart. Not much different than the side-track. Then Brownell invented the real game changer, the hydraulic trailer (and variations such as self-propelled hydraulic yard trailers). Together with jack stands and dunnage, boats held for summer or winter storage could be placed, quite literally, inches apart. Even better, as now marinas have indoor and outdoor rack storage. Now boats are nearly touching and five stories high. Good on the increase in revenue part, but really bad when it comes to the potential for the rapid and uncontrollable spread of an open flame event. Frankly, it makes it nearly impossible to attack and suppress that type of fire.

Marinas are bigger these days, too. It is not uncommon to see a marina have hundreds, if not thousands, of in water dock and slip spaces. Docks can be several hundred feet long and can include covered and uncovered slips. This makes a fire on a boat while in the water very challenging to fight.

Typical Causes
I’m going to start off with electric heaters. No, no, no! “If I had a nickel”, as Mom would say. Electric heaters pose a real threat. It is not just the heat that they generate (catching nearby combustibles or freshly varnished surfaces on fire when someone is using them to dry their newly varnished interior) it is the amperage that they draw and the resistive heat buildup on electrical connections and shore power systems that is the real concern. So, this is a hard no. Your dockage and storage contracts need to specify this clearly and unequivocally.

A close second, and usually one associated with the above heater issue is the use of extension cords. Again, it is usually not the cord, but what it is powering. As a marina or boatyard owner and operator, you just can’t really know unless you trace the cord into the boat to find out. Usually, it is powering a heater or some other high amperage device and, again, the potential exists for a slow resistive buildup of heat and a resulting fire. So, my advice is simple. Boats in the water at slips should be using designated shore power systems only. Boats in dry storage should not have extension cords running to them while unattended. This should be enforced.

Your shrink wrap process also needs to be well-thought-out. Is shrink wrap material fire retardant? If you listen to the manufacturer of the material, they would have you believe that it is. However, in real life testing and fire cause investigations, it is not only not fire retardant, it is flammable and will propagate a flame. How do you shrink wrap? With an open flame gun, of course. Worse yet, sometimes that gun is put on the end of a ten foot pole to extend its reach, and users may remove the guard from the gun to reduce weight. When the gun touches the shrink wrap material, it starts a fire that is not visible and 30 minutes later, a row of boats is aflame. No kidding.

A few other hot items to address include portable container storage of combustibles like paints, resins, thinners, acetones, and fuels. It is essential that these are stored in metal cabinets. Open containers are dangerous. Dispose of hazardous materials safely and away from structures if at all possible. Do not leave catalyzed resins unattended – ever. Dispose of them properly outside and in fireproof containers or drums. Then there is the need to gas free any and all tanks for hot work. This is a requirement under CFR 33, NFPA and several OSHA standards. So, what is “hot work”? It is not just welding. “Hot work” includes “electric or gas welding, cutting, brazing, or similar flame or spark producing operations”. Years ago, a friend of mine who owned a boatyard in New Jersey died while installing a fuel gauge sending unit in a customer’s fuel tank. How, you wonder? He had to remove some caulking/sealant that was under the old sender, so he took out his trusty grinder. The tank blew (gas vapor explosion) and that was that. Very sad, but preventable had he just known or understood the risk.

Follow the Standards
The following are some standards that you and your crew should be familiar with. I recommend getting copies of the standards and keeping them in your management library. In addition to all of these recommendations, you should have a library of operation manuals at your staff’s disposal. Training materials on machinery operation, rules and procedures, safety manuals and standards should be stored in this library. As for standards, here are some of the most important standards that relate to the topic of fire and fire safety. Standards may not be law, but your local laws and ordinances may be based on these standards and the courts will most definitely rely on them in any contested case of liability.

NFPA 303 and 30A: The National Fire Protection Association (NFPA) is the standards-based organization for practically all industries, marina and boatyards included. While not law, the standards are utilized by the Authority Having Jurisdiction (AHJ) nationally to make laws and regulation. They are the recognized standards and, as such, should be adhered to. NFPA 303 is the Marinas and Boatyard standard and 30A is the Code for Motor Fuel Dispensing Facilities and Repair Garages standard. Chapter 11 within 30A is the chapter dedicated to Marine Fuel Dispensing Operations.

NEC 555 – National Electrical Code – Article 555: This is the section of the codes that deal with marina and boatyard electrical systems to include “the installation of wiring and equipment in the areas comprising fixed or floating piers, wharves, docks and other areas in marinas, boatyards, boat basins, boat houses, yacht clubs, boat condominiums, docking facilities associated with residential condominiums, any multiple docking facility, or similar occupancies, residential docks… and facilities that are used, or intended for use, for the purpose of repair, berthing, launching, storage, or fueling of small craft and the moorage of floating buildings.” Pretty comprehensive and that is just part of the first paragraph of the standard. Suffice to say that you and your electrical contractor need to fully understand and comply with your jurisdiction’s adoption of this code. The differences between 2014 and 2022 are vast.

ABYC TY 28 : American Boat and Yacht Council Technical Information Report. I threw this in because it deals with the boat lifting and storage ashore for vessels and it recommends that compliance with NFPA 303 standards for supplying power through only GFCI (Ground Fault Circuit Interruption) be adhered to. It also notes that, “No unattended electrical equipment should be in use while the boat is in dry storage.”

Local Building Codes: Make sure you are in compliance with your local building, fire, and electrical codes.

Daniel K. Rutherford, IAMI, CMI, LPI is the director of Claims and Risk Management at Maritime Program Group, a subsidiary of One80 Intermediaries. He can be reached at drutherford@maritimepg.com.