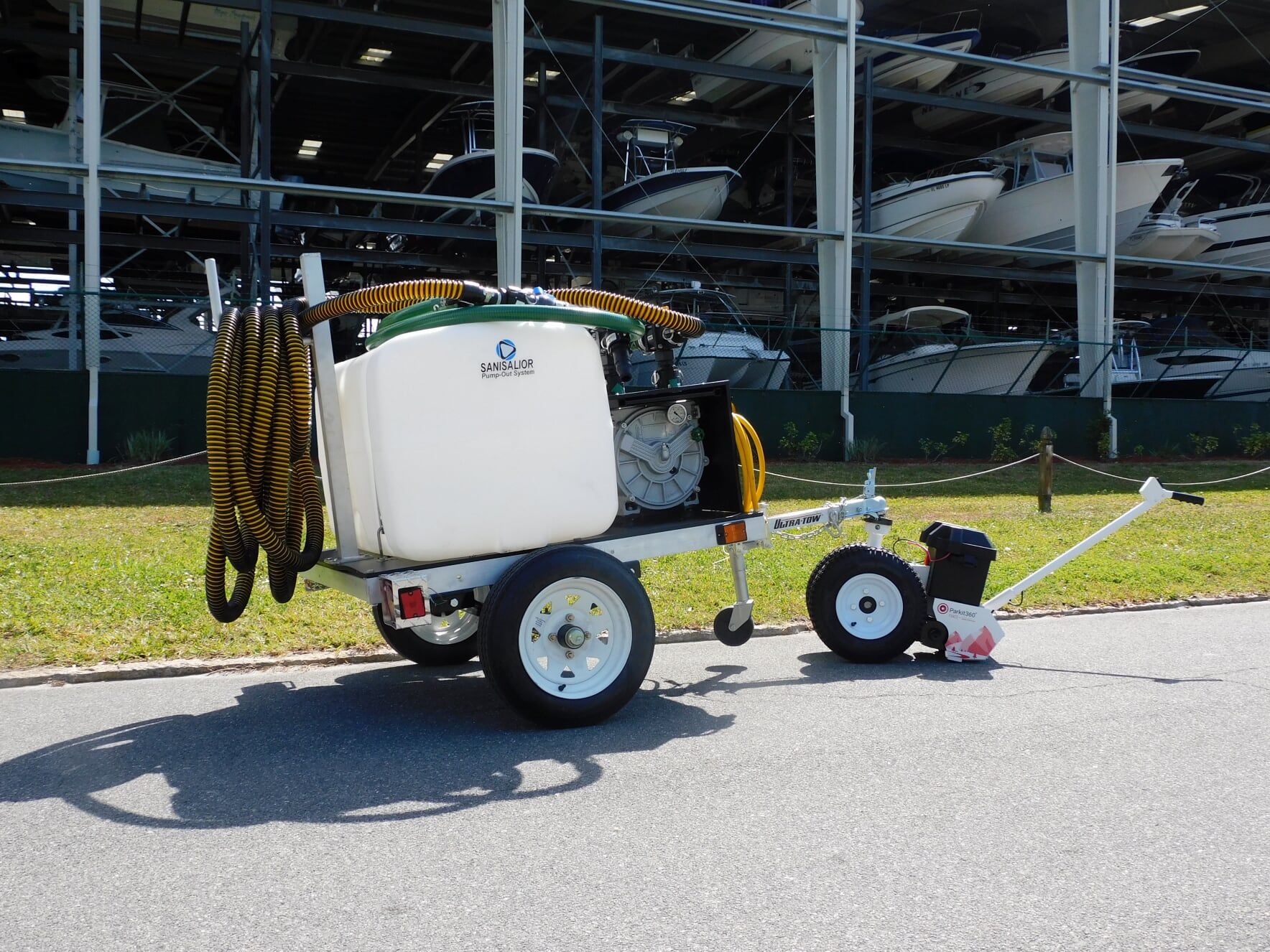 The major overarching trends for pumpout systems have remained fairly steady for some years – more use of in-slip systems; and portable systems that are more powerful and more mobile. Often, portable systems are used to supplement stationary pumpouts, and offer boaters a more convenient service. While those trends are continuing, a closer look will show how manufacturers are fine-tuning new and old systems, maintenance and safety requests, and material innovations to meet customer requests.

At first, in-slip service was primarily used for larger boats, but now, the industry is also seeing them at slips for smaller boats, down to the 30-foot range. Systems that cater to larger boats are also changing to meet the demands of these vessels. In some cases, those demands are bringing back old systems.

Force Main System
In-slip and portable pumpout systems have been in operation since the 1970s. Same as now, marinas were looking for more convenient ways to offer pumpouts. At Keco, the first in-slip mobile systems were force main pumping units. The portable “force main” unit is a transfer pump system with no tank and an inlet and outlet hose. The portable force main cart is wheeled up next to the vessel requiring service; the suction hose is connected to the holding tank; and the discharge hose is connected to the force main plumbing hydrant installed within the dock. The unit vacuums out the waste and transfers it directly to the landside point of connection (municipal sewer connection, septic tank or holding tank).

Around the late 1990s and early 2000s, pumps got more sophisticated and powerful, and vacuum systems became possible for in-slip operations. Instead of moving around a heavy pump, a centrally located pump could now provide the suction required for an in-slip vacuum system. “That’s what we’ve been promoting for the last 20 years,” said Andrew Bleier, senior vice president of Keco Inc.

More recently, the systems have started running into issues with larger and larger vessels, typically megayachts more than 100 feet, Bleier said. These vessels often have a much higher freeboard and the holding tank connection may require the inlet hose being stretched up and over the railing and then down into the bilge. This additional vertical lift can approach the limits of what a centralized vacuum system can generate.

“It should be noted that vacuum or the pump’s ability to generate suction is limited by atmospheric pressure, whereas pressure or the ability to push fluid is theoretically limited by horsepower,” Bleier said. This additional lift may slow down the performance of the pumpout process to a point where the pump is required to operate for many hours continuously putting significant wear and tear on the pump components.

In some cases, larger vessels are also designed with their own on-board pumps to help push waste off the boat. It is more efficient to push with a pump, than it is to pull (with vacuum), but a centralized vacuum system (plumbing, connections and pump) is not generally designed to accommodate the additional positive forces or the increase in resistance from an on-board discharge pump. It is becoming more common for vessels with on-board discharge pumps to damage the plumbing systems, which were designed to operate under vacuum rather than pressure.

Bleier said, more recently, at facilities with larger vessels marina operators are opting for both systems – a vacuum system for in-slip service for vessels under 100 feet and an additional force main system for the larger vessels.

“When designed properly the two systems can be complimentary and will provide the users the best of both worlds,” Bleier said. The additional cost of the force main plumbing is relatively inexpensive, he said, if the dock system can support the additional space requirements. At a facility with only large vessels, a portable force main system can provide better performance and reduced capital expenditures when compared to a traditional in-slip vacuum system.

Bleier has some precautions with designing force main systems, as they carry increased risk with pressurized sewage lines over the water. “It needs to be designed properly,” he said, “and the connections on the docks have to be tamper proof.” Bleier said pipe sizing and layout are key to focus on in the design phase. He also stressed the importance of back flow prevention.

For marinas that prefer vacuum systems, some are opting for dual tanks. Oliver Hahn, electrical engineer at Waubashene, which produces vacuum systems exclusively, said the trend has definitely been for larger and more powerful systems, to meet big boat demands. With a dual tank system, it prolongs the life of each pump and provides more consistent service to users.

The two vacuum systems alternate operation. One will suck sewage to the tank, then discharge to the sewer. Usually, downtime occurs while the tank empties, but with dual tanks, the other can take over, while the full tank empties.

Maintenance/Safety
Pumpout systems have changed steadily over the last two decades. From diaphragm to vacuum tank to peristaltic systems, which still represents about 80 percent of the market, said Darryl Smith, national sales manager, pump division of Edson International. The main wear item on a peristaltic system is the internal hose, “like a tire on a car,” Smith said. “The more you use the pump, the more you replace it.” Hoses have gotten stronger to match pump power, but they are still an expensive item to replace repeatedly, around $1,500.

In addition to continued improvements to mechanical components, such as maintenance free gearbox’s and lubrication free pump housings, Keco has added another feature intended to extend the life expectancy of the costly internal peristaltic hose. The addition of a secondary timer within the control panel helps to eliminate the situation where the user leaves the pump operating for hours or days on end mistakenly. The addition of the “run-away pump timer” prevents the pump from operating endlessly causing excessive wear to the expensive internal peristaltic hose.

Operators would start the pump using the “local” bypass switch at the control panel, perhaps because the wireless remotes were not working, or they wanted the pump to run for a longer period before automatically shutting off. Then, when users forget to turn the pump off, the next day the pump will be in need of a costly repair.

Another recurring problem with systems is pulsation. “Back to the original diaphragm system, there was banging and clacking, and the inlet hoses jump around for the user,” Bleier said. Adapted from its use in the municipal wastewater systems, Keco has developed a pulsation dampening system, which eliminates this pulsation in the hoses and dockside plumbing.

“We have been able to eliminate about 90 percent of pulsation and audible noise,” Bleier said. Additionally, the two-part dampening system improves the life of the internal peristaltic hose up to 25 percent, which can be a huge cost savings. The system is available on Keco’s newest models, and it can be added to older systems by other manufacturers.

The pulsation dampening system also provides true overpressure protection. “When a pipe becomes plugged or obstructed, we’re relying on the motor or circuit breaker in the control panel to identify that the pump is working too hard and shut off,” Bleier said. The pulsation dampening system will accommodate a safety switch, causing the system to shut off before reaching an unsafe pressure. On a force main system, Bleier said, the inclusion of overpressure protection is critical when dealing with pressurized sewage over the water.

“The main reason is that it eliminates the glued joints of PVC pipe that commonly are the source of air leaks or failure points, and that, in turn, impede on the vacuum and suction of the system,” said Cale Grauer, vice president of sales and marketing and EMP Industries Inc.

To improve material life and maintenance, Waubashene has also moved from steel painted parts for the tank, panels and brackets to pre-coated aluminum parts. “It makes all the panels lighter and easier to handle and remove,” Hahn said. “It’s easier to manufacture too.”

pumpout hose. The universal suction nozzle tip completes the connection between the pumpout system and the vessel being offloaded. A combination of effluent, holding tank chemicals and UV from the sun will cause the rubber tip nozzle to breakdown. It generally requires replacement every year or two.

Keco has recently upgraded from the traditional isoprene rubber to an newly developed engineered elastomer that is now estimated to more than double the useful life. The new nozzles are color coded blue and include both encapsulated brass reinforcement, splash shield and back flow prevention.

Service Trends
Portable pumpout units are still popular with many marinas. For a smaller application, they can save money on infrastructure, said Larry Elias of Elias Environment Services. For larger boats, marinas are challenging manufacturers to make portable units with larger and larger capacity, which requires more power to operate. Marinas can choose from motorized options that are trailer based, a motorized cart or hand dolly unit, or units mounted on utility vehicles like golf carts. The maximum capacity for a motorized portable unit is around 125 gallons, Elias said.

Since the inception of the Clean Vessel Act (CVA) and grant money to support pumpout infrastructure, state CVA administrators have monitored pumpout production. “When the program first started, it was simple calculation – how many hours the pump ran times how many gallons per minutes it was tested at to perform. It was a simple math calculation,” Smith said. However, that doesn’t account for the time needed for suction to build up in the pump and the time the pump runs to clear out the pipe. Calculations weren’t entirely accurate.

From there, systems developed algorithms to do the calculations, accounting for dry run and shut down times. Wireless remote reporting systems have further improved accuracy, but only so much. Smith said recently the CVA program has been advocating for magnetic flow meters on systems to more accurately measure the gallons pumped. However, those systems still have problems with measuring air-entrenched sewage. The systems aren’t pumping a solid stream of liquid; they’re pumping air and liquid. Smith said the magnetic flow meters are about 80 percent accurate because of air measurements, and even less if they’re not properly installed. The units are also very expensive, Smith said.

Added Revenue
EMP said some marinas are turning to their pumpout systems for additional revenue. “With an in-slip central vacuum pumpout system, marinas are talking about having their boaters pay a monthly service fee either at a flat rate or based on usage to have their vessels pumped out,” Grauer said. As a revenue generator, marina operators want pumpout systems operating properly, and they’re more likely to do preventative maintenance or have spare parts readily available or a service agreement in place.

While the general infrastructure for marina pumpout systems has remained the same for decades, manufacturers continue to fine-tune for speed and efficiency. As boater and vessel demands change, systems respond with increased convenience and durability, no matter the power demands.