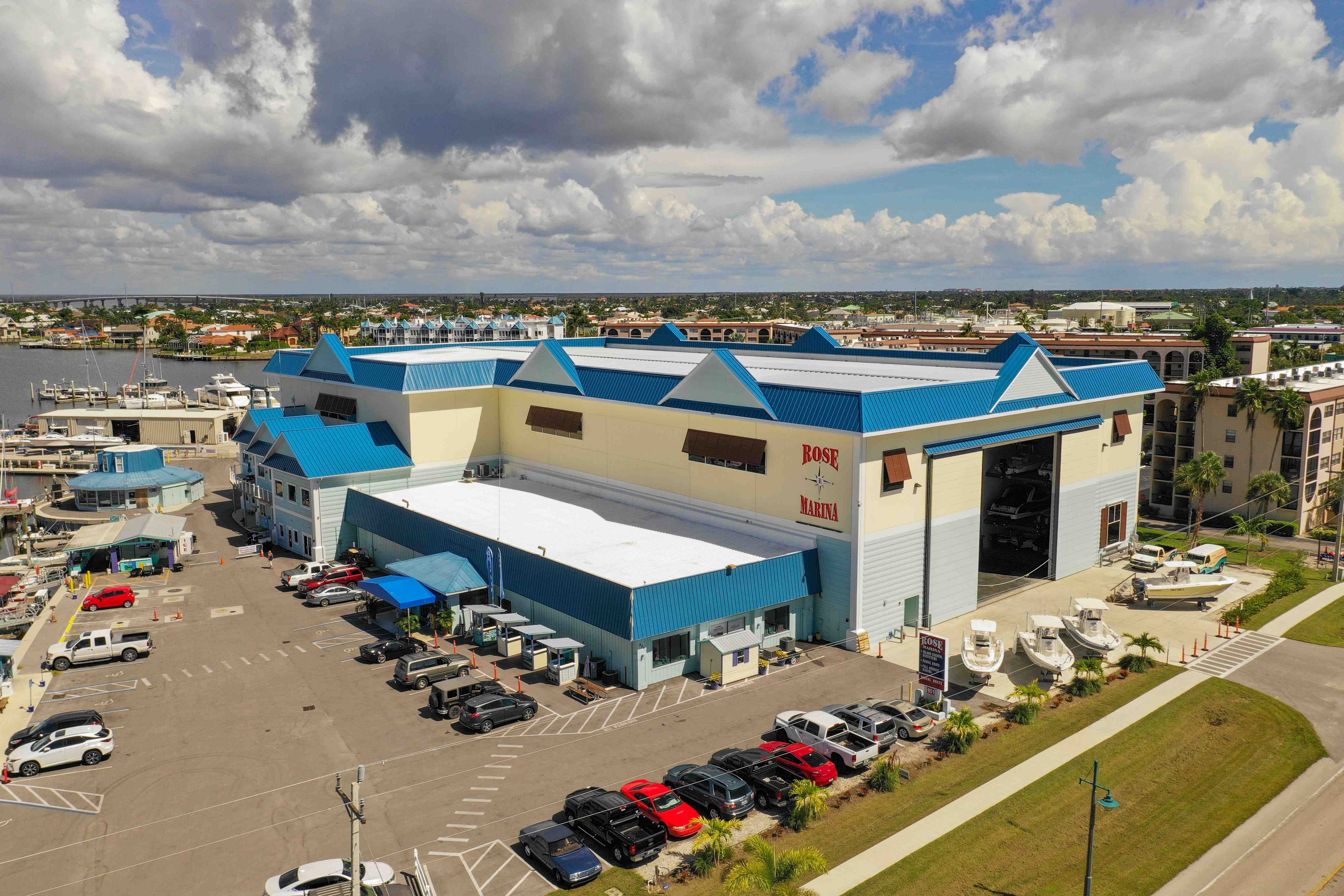 Rose River Marina on Marco Island, Florida, is nearing the end of a large-scale renovation of its 50-year-old property. The last major piece of the work, the construction of a new building for bathrooms, showers and laundry, should be underway soon.

“But throughout our whole renovation process over the last few years, we have not stopped operating. We have rebuilt all this and continued to deliver our full-scale marina services. Keeping the customers and the cash coming in was critical,” he added.

The first project was the replacement of a rusted metal drystack storage building. Designed more than three decades earlier to hold small boats, it had been retrofitted over the years, increasing the size of the spaces to accommodate larger boats but reducing the number of vessels it could hold.

The new drystack, made of concrete up to 11 inches thick, can store 144 boats as large as 50 feet long. Built by GCM Contracting Solutions of Fort Myers, Florida, the drystack facility is rated to withstand winds of up to 170 miles per hour.

Since the new drystack was going in the same area as the old one, Rose River Marina worked with the City of Marcos and gained permission to temporarily store its customers’ boats on some adjacent property the marina owned. The marina purchased an Econo Lift 20-ton self-propelled hydraulic trailer to move boats in and out of the water from this temporary location.

The rebuilding of the drystack storage building was well-timed, High said. “We opened that in January 2017, and in September 2017 the eyewall of Hurricane Irma hit us directly. If we hadn’t rebuilt that, our marina would have been completely demolished.”

Although Irma inflicted half million dollars in damages on the marina’s docks and buildings, the storage building lost only a few architectural pieces. Its customers’ boats, safely inside, were unscathed.

With the drystack building ready to accommodate larger, heavier boats, the marina had to completely rebuild the concrete path between the drystack building and the docks. “We had to put in 8,500 square feet of 14-inch thick, 5,000 psi concrete,” High said. The job was a logistical challenge; in order to keep the marina operating, the work was done in three separate phases. In each area, the old concrete was chipped out and then the new concrete was poured. After that, the concrete had to set for 30 days before any traffic could drive on it.

The replacement of such a large amount of concrete also led to the upgrade of the marina’s stormwater system. The marina installed a StormTech chamber system, which is designed to hold the first inch of runoff and send it through a maze of filter fabric and rocks to clean it. “The pollutants like dust, debris and oils come from that first inch of runoff,” High said. Any water over one inch is diverted to a weir and funneled out into the bay.

The marina made improvements to its in-water facilities as well. Rose River Marina is permitted for 110 wet slips, but that number has shrunk to about 70, since the docks had to be reconfigured over the years to accommodate larger boats. “But we have a lot of staging dock now for our drystack, so we can put boats in the water in just a few minutes,” High said.

The marina’s owners had originally considered replacing the inner T-dock with a new floating concrete dock system. “But it was a better business decision to install a fixed dock with 12 boat lifts and a floating fuel dock,” High said. The boat lifts can handle boats up to 40,000 pounds and 47 feet in length.
A new 95-foot-long floating fuel dock with two gasoline dispensers and two diesel dispensers forms the top of the T. “One of those will be a high-flow diesel for bigger boats, which is sorely needed in our area. We are the only deepwater diesel dock on Marco Island,” High added.

The marina’s deep water attracts larger vessels for which Rose Marina used to provide bottom painting, pressure washing, prop and shaft service. While that work stopped during the heavy construction times, Rose Marina is gearing up to offer that service again with a more environmentally friendly system.

“We have a specially designed pad on which we do the dirtiest of work. The pad is engineered not to rush the water along, to slowly flow in one direction so the solids filter out. Then the water goes into another trough, which continues this gradual slope and allows more settling of solids to occur,” High said. A pump at the end of this trough moves the remaining liquid into an Aquahaul 500 system, which uses UV filters, bromine filters, a large particulate filter and a 10-micron filter to clean the water. Then the water goes into a settling tank, giving solids a further opportunity to settle out.

“A pipe that sticks up in the tank removes the clean water and sends it to our pressure washer, and the cycle starts all over again, so it’s a closed loop,” High said.

It’s been a challenging five-year process to bring the marina up to date and install the latest, most environmentally friendly systems, High said. But boaters are reaping the benefits, and so will the environment. “This is what responsible boatyards have to do in this day and age,” he added. 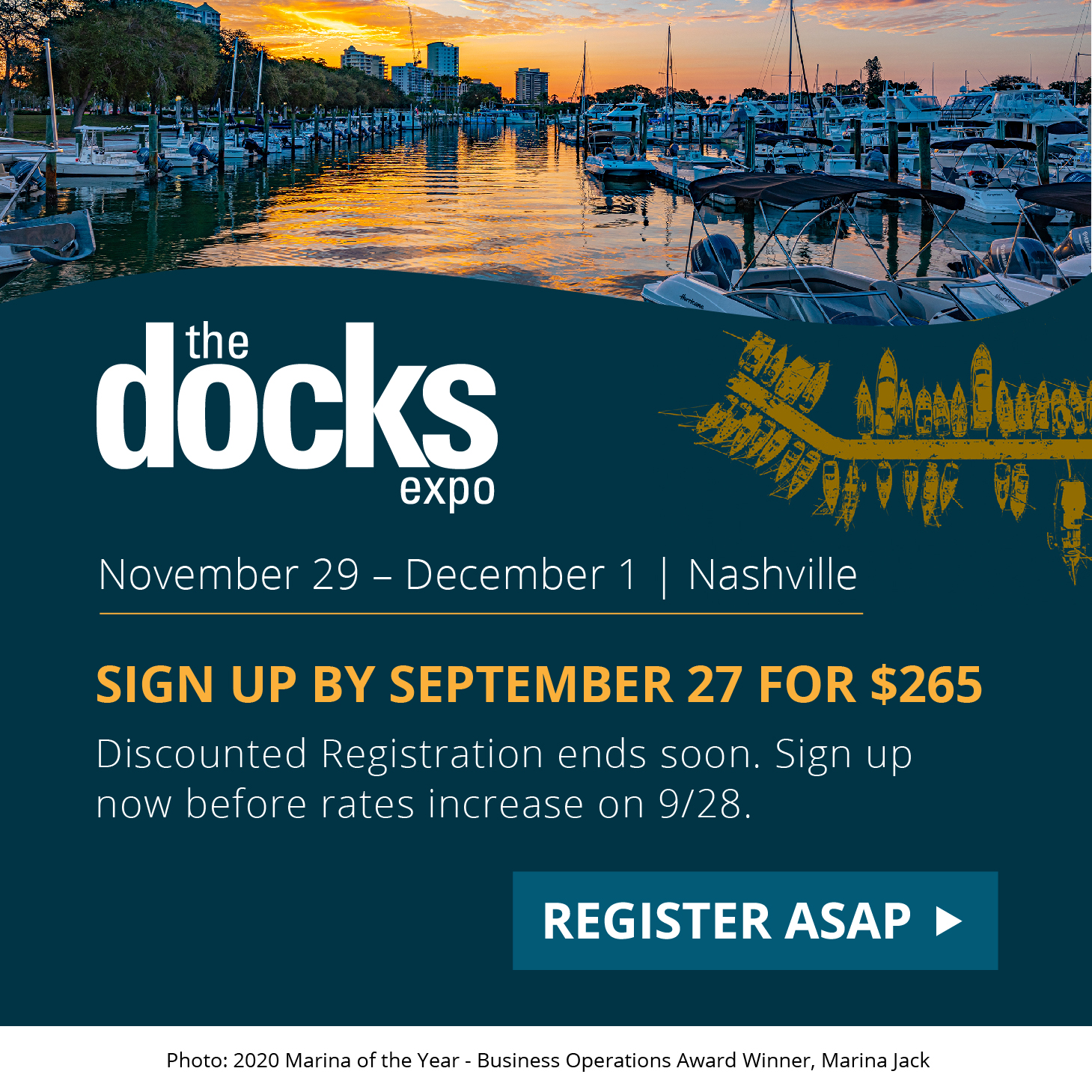