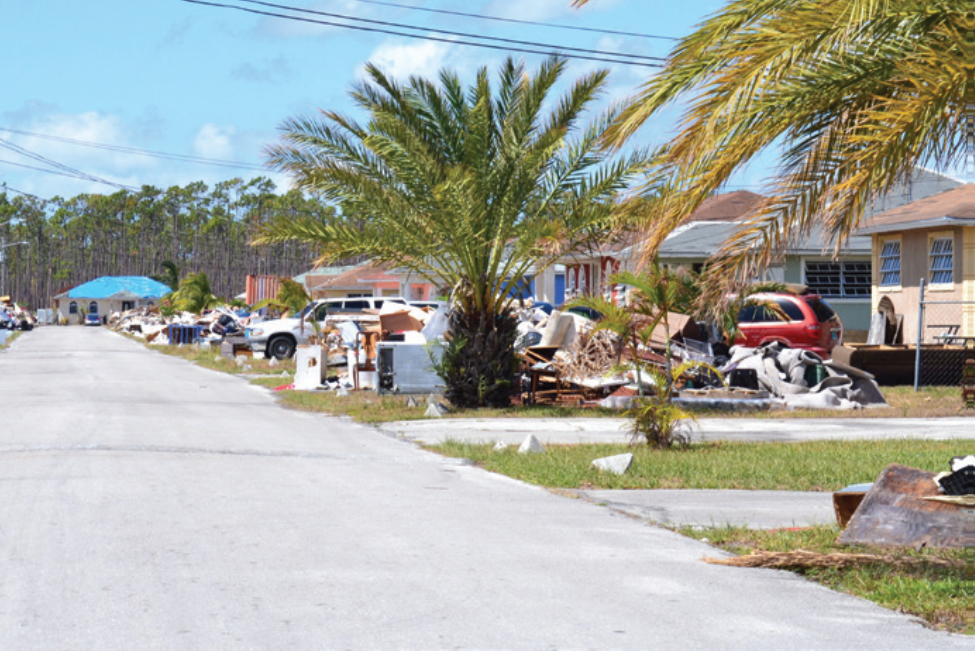 After Hurricane Dorian devastated the Bahamas in August 2019, the owners of Sands Harbor Resort and Marina in Pompano Beach, Florida, stepped up to assist with relief efforts.

Impulsive Group, owned by father and son Hank and Brandon Freid, donated the marina, office space, storage facilities and supplies. Sean Ives, marina coordinator, worked with relief organizations and the Bahamian government to ensure they were collecting items needed on the island and organized a relief flotilla to deliver the supplies.

Ives used social media and made a lot of phone calls to get word out about the project and to enlist private boat owners to help deliver supplies. The marina was listed on the Bahamas government website as a drop-off point for supplies, so that added to the number of people bringing in items.

“We used the entire parking lot for storage and trucks dropped off pallets of water and other supplies,” Ives said. About 96 private boats participated in the flotilla delivering supplies. “The boats were continually coming and going depending on the weather.”

Brandon Freid said, “Like so many other Floridians we have lived through the horror that a hurricane causes, and because we had the equipment, manpower and expertise, we welcomed the opportunity to lend our support and provide the assistance that was needed.”

Although the Freids have experienced hurricanes first-hand, it didn’t prepare them for what he saw when he arrived in the Bahamas. “It was 100 times worse than I thought it would be,” Hank Freid said. “It looked like it was hit by a bomb.”

Freid said all the marina staff participated in the relief efforts. “Everybody was full-time,” he said. “They actually worked harder.”

The Pompano Beach community lent its support as well. “It really brought together a lot of people,” Ives said. “We had more than 100 volunteers sorting and packing. It was amazing to see everyone come together.”

The supplies were delivered to churches in the Bahamas where people could pick up the supplies they needed.

On November 12, the Pompano Beach City Commission recognized the Impulsive Group for its efforts in providing relief to the people of the Bahamas.

“We take pride in the example of these citizens who gave their time and energy to care for the most vulnerable among us. These selfless deeds have contributed to a culture of compassion, and taught people the importance of giving back to their communities,” stated Pompano Beach Mayor Rex Hardin, during the presentation of a proclamation issued by the Pompano Beach City Commission.

Ongoing Relief Efforts
There is little media coverage of conditions on the islands now, but the needs are still there. The marina is helping direct relief efforts to provide safe, clean water for the islanders.

Freid said most of the island’s water supply is still contaminated and continually shipping over plastic bottles of water creates a lot of pollution.

The marina is supporting a local charity, Shipwreck Park, that is raising money to purchase, distribute and install reverse osmosis units that will provide clean freshwater directly from the ocean. The reverse osmosis water purification process is accomplished by water pressure pushing saltwater through a membrane to remove impurities from the ocean water making it safe to drink.

The units will include a generator for providing the power to run the units, the reverse osmosis device, and a large tank to store the freshwater. Each unit is capable of producing 1,800 gallons of water a day providing water for 100 to 150 people. The average cost of each unit including generator and tanks is $7,500.

On February 8, the City of Pompano Beach, Shipwreck Park and a Florida-based concert and festival promoters worked together to host “One Love Bahamas,” a benefit concert for victims of Hurricane Dorian to aid recovery and rebuilding efforts in the Bahamas. The event was at the Amp in Pompano Beach. All event proceeds will benefit Hurricane Dorian victims in the Bahamas and be administered by Shipwreck Park a 501 (c) (3) corporation.