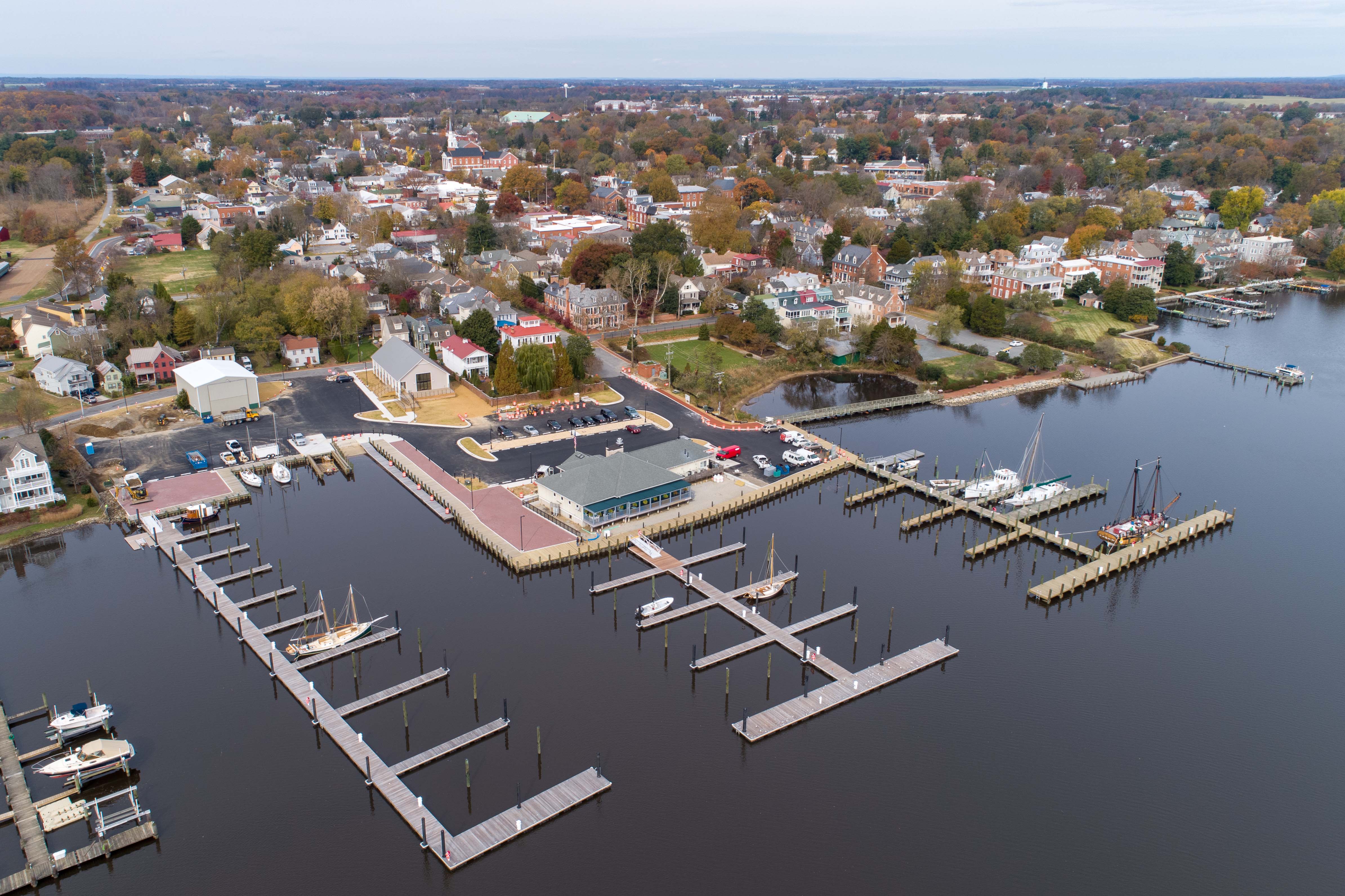 In the small town of Chestertown, Maryland, much of its history has been told at the waterfront. It once stood as one of six royal ports of entry. Now, the town relives that history in annual events that draw thousands of tourists to this quaint waterfront. After the marina in Chestertown fell into disrepair, the town purchased the facility in 2012 and started a major renovation project to bring it back into peak operation and return the marina to its place as the centerpiece of the small Eastern Shore town.

“The main reason [the city] bought the marina was to maintain public access and prevent it from being privatized and converted into condos,” said Kees de Mooy, zoning administrator, Town of Chestertown. He said a plan for private property had been considered, but the town had long been engaged in reinvigorating the Chestertown waterfront and didn’t want condos on the waterfront. The city had already built a waterfront promenade throughout some of the town, which would be continued through the new marina.

“The entire Chestertown waterfront has seen a renaissance in the last 25 years,” de Mooy said. The park near the marina hosts many annual events, jazz festivals, private weddings and other events, including memorial and historical events, such as the Chestertown Tea Party Festival and Downrigging Weekend.

Raising Up
In addition to dilapidated infrastructure, Chestertown Marina and its upland

area saw frequent flooding. The combination of subsidence and sea level rise had left the area particularly vulnerable. De Mooy said the marina site was flooding approximately once per month, sometimes more, depending on the tides. Some of the dock areas had been raised with makeshift layers, but it was still a common occurrence to see parts of the docks completely submerged during high tides, and the entire property was about two-thirds inundated, including the entire area around a waterfront restaurant on the property.

Before new docks, the town needed to address the water-level issues, which included dredging the basin and raising the upland area. For two seasons, prior to dock repairs, Hi-Tide Marine Construction dredged the marina to 6 feet below MLLW, meaning at the lowest tide, the basin will have six feet of water. Since the renovations, other deeper water areas of the marina have depths that are 16 to 18 feet for larger vessels.

The in-water dock renovations and the upland work were done simultaneously, which required intense coordination. The restaurant at the marina also remained open during renovations. David A. Bramble Inc. of Chestertown did all the upland site work, including raising the entire area about two feet and the installation of new sewer lines, electrical utilities and paving.

Dissen & Juhn began on the dock work in December 2017. Prior to installing new docks, the contractor had to demolish and remove a large portion of fixed timber docks. The project also included 268 feet of new vinyl bulkhead and 359 feet of pile-supported timber bulkhead that held a 10-foot wide boardwalk. This connects to the town’s waterfront promenade, which Dissen & Juhn originally built in the 1990s. The marina boardwalk connects a timber pedestrian bridge on the upstream side of the facility to a paved walkway on the downstream side.

Bulkhead and Piling
The original bulkhead was built on fill. “Anytime you have that at the

waterfront, you can rest assured that material will be soft,” said Gil Dissen, president of Dissen & Juhn. Additionally, agricultural runoff from local farming operations was prominent in the area, adding a thick layer of fine silt to the bottom, which makes for difficult building conditions.

Dissen & Juhn built most of the bulkhead with a pile-supported wall. Tie-rods connect to the piles and to an anchor behind the wall, which holds it all in place. In certain areas, near the restaurant, where its foundation prevented a conventional dead man pile system, the contractor used a gravity block type anchoring system. A heavy concrete block wall is where the tie-rods are secured, and the sheer weight and mass of the gravity wall keep it in place. Dissen & Juhn installed 6 pre-cast concrete anchor blocks, 3.5 feet high, 14 inches thick and 18 feet long. The blocks set together, like a tongue and groove connecion. Each block weighs 4 tons.

For the piling bulkhead and floating docks, Dissen & Juhn installed 234 round timber piles, ranging in length from 20 to 65 feet and 140 vinyl sheet piles, 24 feet long timber piles. Where the fine sediment required securing the structure to the river bottom, 30, 50- to 90-foot long steel pipe piles were used. The docks are wooden frame floating docks with Ipe decking, manufactured by Meeco-Sullivan.

A portion of the marina’s fixed docks remain. Those were renovated more recently and were already at the correct height needed to adjust for water level issues. Dissen & Juhn widened the existing fixed pier and extended the docks by 70 feet, including L-head and T-head docks. The L-head dock sits on the downstream side, up against neighboring property. The T-head sits in the middle of the marina and has room for its largest vessels.

In addition to Tall Ships festivals, the marina is home port to the schooner Sultana, and the enhanced side-tie areas better accommodate these large vessels.

Other Renovations
Yerkes Construction Company built the new marina office, clubhouse and store building. The Chestertown Marina Interpretive Center houses the bathrooms, showers, laundry room and offices. The building also includes an art gallery space intended for the arts council and other groups to mount exhibits. De Mooy said the town doesn’t have a commitment yet for art work, but some local art groups are interested in the space.

Additional work will be done at the boat launch. The boat launch in the past had not had a lot of traffic, but new dedicated parking for trailers, which was part of the upland work, will bring in more traffic. Work to renovate the pre-existing boat launch and add some additional slips is ongoing with Dissen & Juhn.

Future Operations
De Mooy said the town did consider hiring a management firm to operate the facility. It ended up consulting for a half day with one of the firms “to pick their brain about operations,” de Mooy said. The town felt that the small marina didn’t have enough potential income to bring in a large firm to run the facility, but it was confident that the small operation could be run efficiently with a few good employees.

In mid-April, the Town of Chestertown hired Samantha Branham as the marina’s new manager. She had previously worked at Tolchester Marina and has been a Chestertown resident for about 10 years.

At its April 15 Chestertown town meeting, the council voted to rename the facility Port of Chestertown Municipal Marina. Councilman Marty Stetson, who introduced the change, said the new name would recognize the historic status of Chestertown as a port, dating back to Colonial times. The new name would also help wipe away any negative associations with the old run-down marina.

“The marina is so critical to this town,” Dissen said. “Chestertown is a beautiful little town.” He said the change to the waterfront is dramatic and very welcome by the town. “The marina is very much a focal point of the town,” he said.