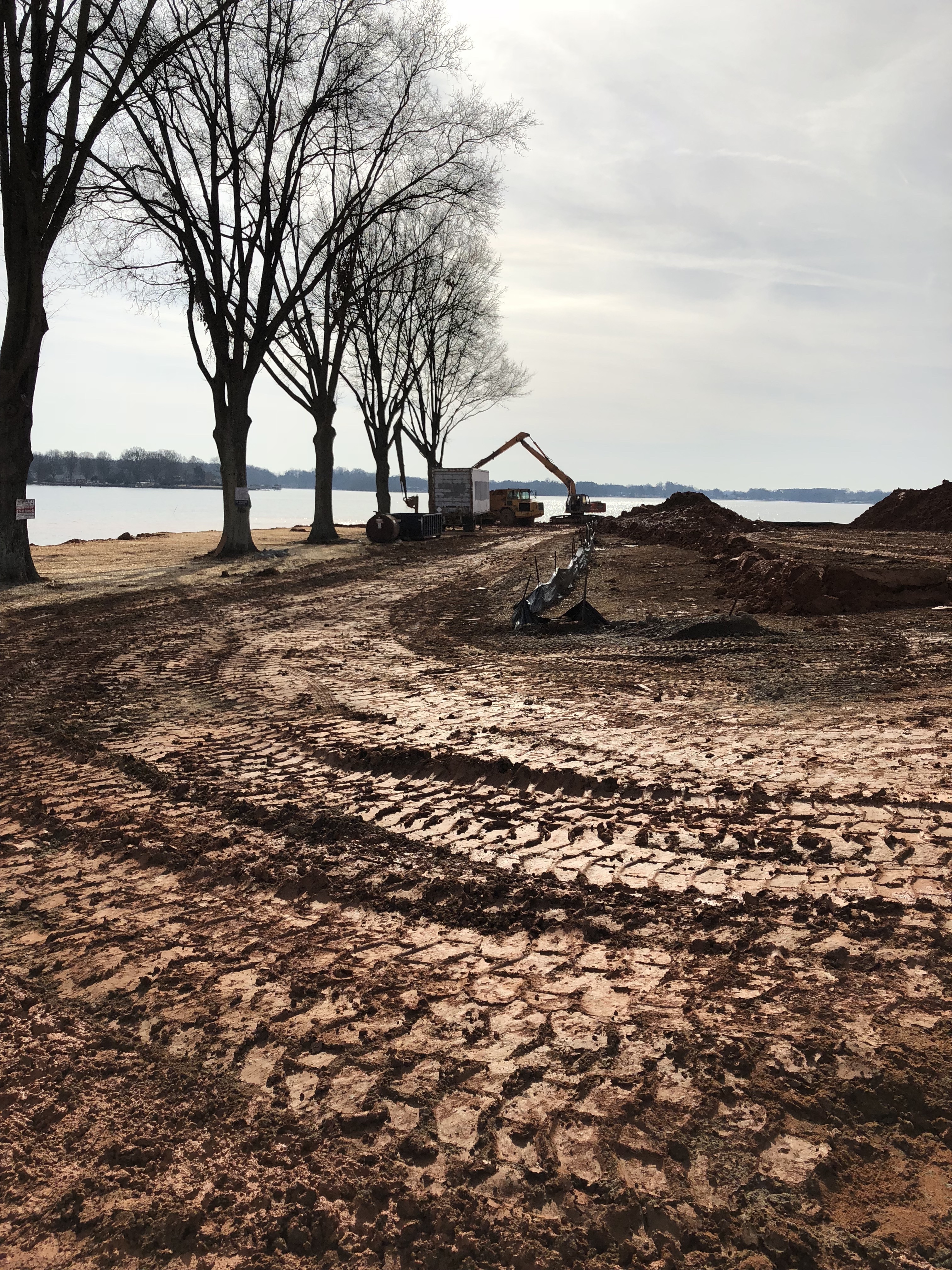 Stutts Marina on Lake Norman in Mooresville, North Carolina, has been serving its community since it was the first marina built on the lake in 1963. Its current owners bought it from the original founders in 2001 and are now in the middle of a large-scale renovation that will grow the slip space many times over and make the marina a first-class destination for boaters on the lake and those visiting from surrounding areas. The process has been lengthy and despite many challenges, it is well on its way to completion.

Jeremy Enck, the marina’s manager, explained that Lake Norman is a popular lake that draws boaters of all types. The lake draws more than 55,000 registered boaters who live on the lake, as well as visitors to its waters. From residents with pontoon boats docked behind their homes to NASCAR celebrities needing slips and fuel facilities, the range of boats and boaters varies.

“People are buying new boats all the time here. This is a huge pontoon lake, but pontoons have changed so much. We are talking $150,000 pontoons with two 350s on the back,” Enck said. Along with pontoons he explains the marina sees everything from 20-foot inboards to 42-foot cruiser yachts with the 22- to 30-foot range boat being the norm. Lake Norman is a destination and a very popular vacation lake for surrounding areas. Enck said that along with the hard-earned reputation the marina has developed and the renovations, completed, underway and slated for the future, the marina will be able to cater to the ever-evolving boating market on the lake.

Renovations have been a process spanning eight-and-a-half years in planning and preparation and are now well on the way to completion despite running into difficulty. The current owners purchased the marina from the Stutts family in 2001 and did some renovations almost immediately, implementing repairs and adding a ships store along with tearing down the existing old wooden docks and replacing them. This work took them through 2006. The new A and B docks were constructed with 15 covered slip and 21 covered slips, respectively.

For a while at that point, the marina ran “on autopilot,” according to Enck. He was hired in January of 2014 at a time when the owners were trying to determine if they would sell the property or renovate and expand. Even though prior expansion plans were squelched by the county and local residents, with Enck at the helm, the owners wanted to try again, moving forward with their expansion plans. Located in a quiet residential area, initial attempts for permits were denied by the county with neighbors leading the fight against approval. In order to expand the marina, a new plan was formulated to gain approval.

As time passed the local residents who were against any expansion of the marina had moved away and Enck and the marina owners hired a consultant, Craig Wyant, to handle the permitting issues. Wyant was instrumental in working with the county and getting everything from environmental studies to requisite paperwork for the expansion. Enck credits Wyant with getting the process moving through the county and subsequently approved. Enck also was able to win over the neighbors with the new plan that was devised to minimize any perceived impact by the expansion. Many more residents saw the virtue of having a first-class marina facility on the lake. Enck credits an open and friendly rapport with the marina’s neighbors and open dialog with them, informing them of the marina’s plans and events. 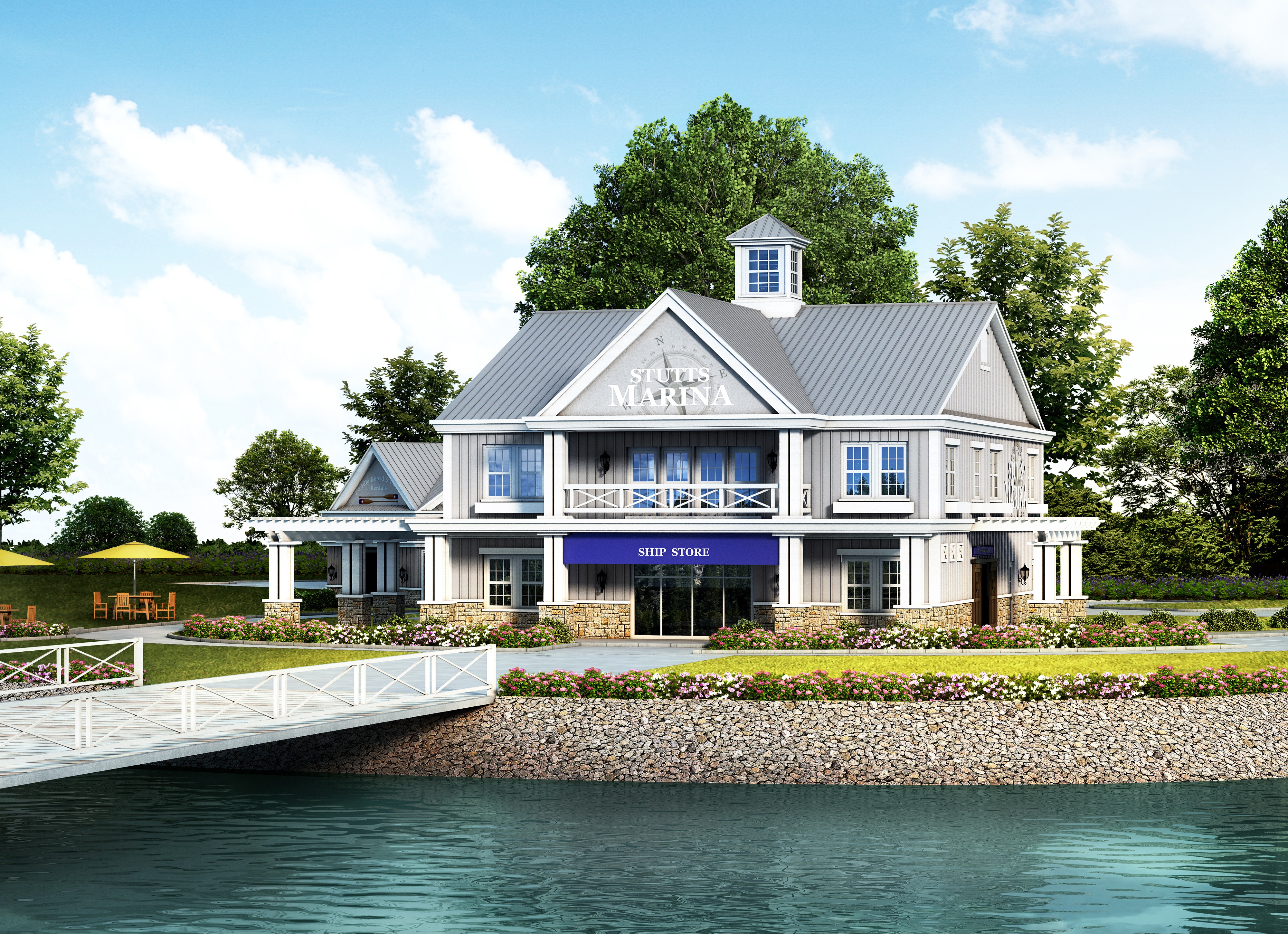 The final renovations at Stutts Marina will include an expanded fuel dock and a new ship’s store, seen here in this rendering.

Dredging
The first stage of the expansion was the dredging and construction of C Dock, utilizing ShoreMaster dock equipment and 14- by 22-foot slips. The new dock was mirror image of B Dock next to it. Dredging of that phase started in January 2017 and completed for the dock in July. The process was not smooth, however, and complications with construction and communication issues between the suppliers and hired construction companies slowed down the project. Dredging for the project also took longer than expected.

The largest, unexpected issue occurred after construction was completed. A microburst weather event hit the dock one night and moved the whole dock 47 feet to the left. Due to the damage, the marina reevaluated its materials and construction methods for future phases. Lake Norman Electric wired the docks before the storm, and that all had to be redone once the dock was repositioned and anchored in place with larger, deeper piling.

Now in phase two at press time, dredging has been underway since late August 2017 to add a new D and an E dock that will install an additional 98 covered wet slips. Rushing to completion, they had until late February before dredging had to stop for the fish spawning season. The dredging removed about 40,000 cubic yards of dense sediment from the lake. Chris Handy of CTC Grading & Hauling did the dredging work in phase two.

This stage also has proven to be a challenge too, not the actual dredging work, but the sediment disposal after the work. Enck said that one thing to take away from this renovation is that anyone contemplating a similar project needs to be sure they have a solid contract for using and taking away the sediment. The promises made to the marina to remove the sediment fell through, and Enck has had a challenging time working through this setback. As a result, the marina is using a lot of the fill to raise the height of the marina property. Although this solved some of the sediment disposal issues, it still added significant costs to the project for reseeding and fertilizing the property.

The next new docks D and E are rounded, shaped to follow the marina property. Despite the unique shape and long runs, the docks are spaced to allow for easy maneuvering and docking of both sides of the inner slips. The new Meeco Sullivan docks will have 14- by 30-foot covered slips, designed as wave mitigation on the outer side. Thrilled with their choice of floating docks Enck said that the floating docks and over design is perfect for this busy part of the lake. The marina will do yearly surveys of the bottom depth and expect that after the latest dredging project, they will not have to dredge again in the near future.

To build a first-class facility, the marina wanted innovative and high-quality docks and equipment. Enck said equipment such as the space-saving and convertible power pedestals within HydroHoist’s HydroLocker, and an Edson pumpout at the fuel dock brought innovation and high-quality equipment to the facility. It has made a better experience for clients and allowed staff to work more efficiently.

Future Renovations
Next, the marina will revamp and enlarge the fuel dock with all new pumps. Fuel sales are a huge part of marina operations. The operation will grow from two old dispensers with a total of three nozzles to a larger fuel dock with five slips that can accommodate boats at the dual 90 octane pumps, single 90 octane pump and single 93 octane pump. The pumps will be supplied by an 8,000-gallon tank for 90 octane fuel and 4,000-gallon tank for the 93 octane all non-ethanol fuel with the ValvTect additive. The new fuel dock will use Scribble marina management software to help make fuel payment by the customers quick and efficient right at the dock without running back and forth to the ship’s store.

The crown jewel of the renovation will be the all new ship’s store. Covering 3,400 square feet this new facility will boast a larger storefront with a wide line of products for sale such as Yeti, Smith sunglasses and much more. It will also have an event rental space for functions and group rental.

Despite setbacks the marina is well on its way to becoming the destination marina it is planned to be. With the additional dockage due to be completed by July 1 of this year and the completion of the ship’s store in March of 2019, Stutts Marina will be a facility worth visiting and emulating.