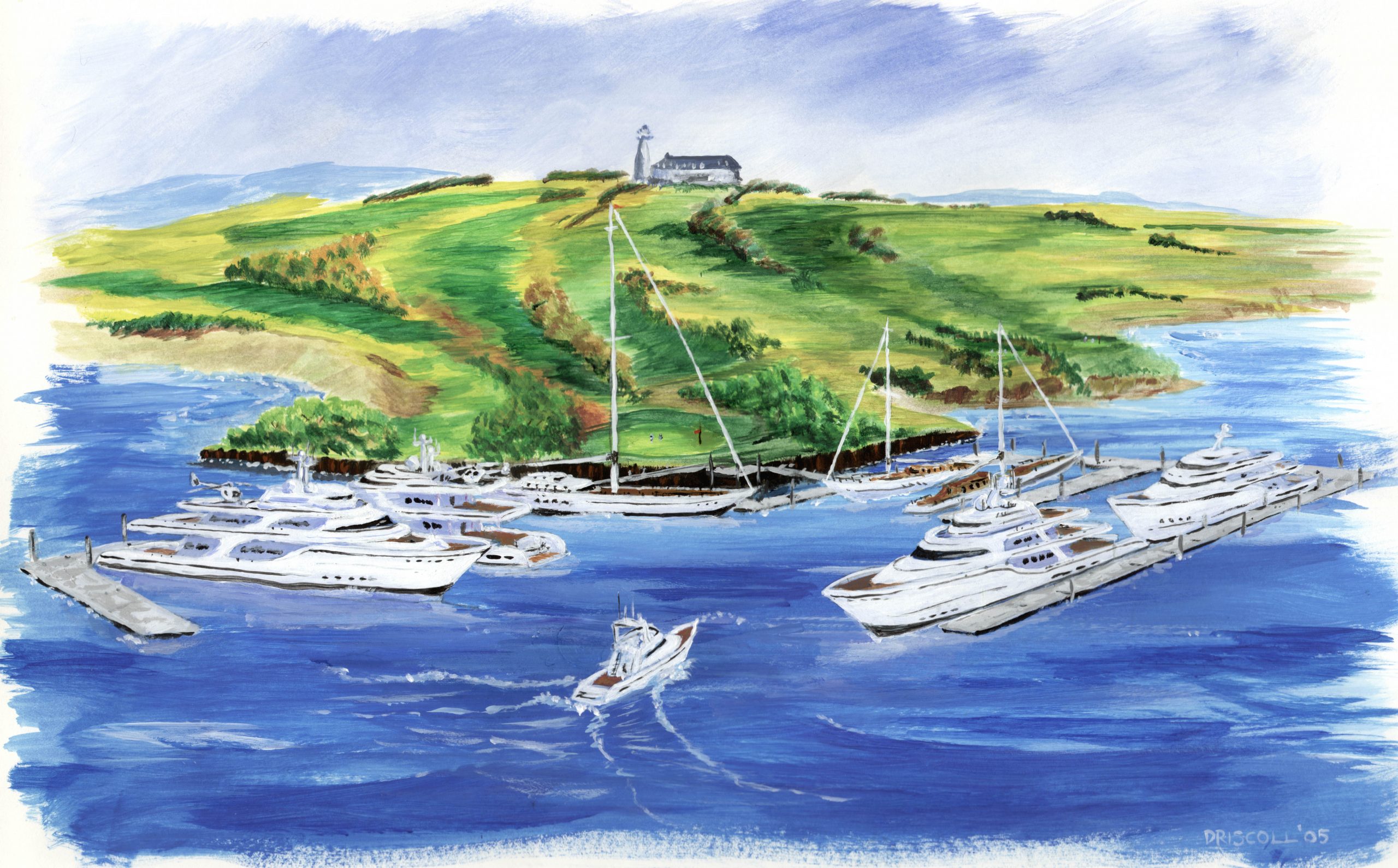 The Give & Take of the Marina Design/Retrofitting Process

The phrase “give & take” has a couple of possible meanings. One would center on the exchange of ideas or being open minded. The other would be most synonymous with the word compromise (whether positive or negative). Both make a lot of sense with respect to the marina design or retrofitting process.

As you no doubt have heard me say before, whenever embarking on a new project, whether for a new facility or for the renovation, repair or expansion of an existing facility, I find it’s best to think out one’s vision and desires. Part of that means taking a hard look as to what has been happening in the industry and/or your region and facility over the last few years, including how the boats have changed, how boaters have changed, and what boats you or the region have not been able to attract or keep? Add to that what types of things have others done that you feel were meaningful? What did not work out well? What have you learned from talking to potential customers? What is it that you can offer that is missing from the area or is attractively different? Thinking through on these and other issues helps hone one’s vision into a more meaningful and targeted approach for implementation.

One also has to carefully think through a timeline for implementation and, importantly, build in extra time for things that might not go as smoothly as planned, including such things as permitting and government requirements, contractor and supply delays.

Once you’ve defined your vision there are several ways to consider such projects – adhere to the vision no matter the cost, budget driven, or some combination of the two. As you likely know, most projects end up in the latter category, which is where a lot of the give and take comes into play.

Budget Considerations
While many projects start with a vision of the best of everything, budget considerations have a way of creeping in during the project which, unless planned for, can significantly compromise attaining the essence of one’s vision. We have seen too many projects radically compromised as financial resources become of concern in the middle of a project.

Those that are strictly budget driven can have the same effect. There are numerous examples where a well-meaning but construction-knowledge-lacking financial controller gets involved and thinks money can be saved by utilizing a less expensive product or contractor, etc., only to find that the result is a lesser quality and causes other compromises down the line, delivering a result far from what was the motivating vision.

One of the most notorious examples that we ran into is where a project was creating and expanding upland through the use of dredged sandy materials – a process called reclamation. The design called for the use of the dredge material that was a relatively long way off from the to-be-expanded upland area. The project was then given to a financially oriented manager who believed that he could save over 60% of the reclamation cost by taking the material from just in front of the upland expansion portion of the project.

Unfortunately, the area’s geology was not considered and the sediment composition of that material was far different from that which had been targeted. The result was that when structures were put on the new land both the land and the new structures started sinking, and the cost overruns to solve these problems were far in excess of the initial budget cost.

Carefully planning and thinking through the vision with a realistic budget is critically important in achieving the desired result. It is normal to want the best of everything. But there are realistic economic scenarios to consider in terms of resources as well as payback and rates of returns. One also needs to consider the various cause and effects of budget driven decisions.

And when looking at cost one should definitely be looking beyond the initial price tag and look at the costs of implementation as well as maintenance. All too often we see decisions made on the upfront cost only. There are differences in the quality that different contractors can deliver as well as products in terms of what the cost of implementing as well as maintaining them will be vs. their initial purchase costs.

In working with a facility owner and manager on their desired project to totally change their pontoon system, which was well beyond its useful life, a program was agreed upon. First a set of specifications was carefully created and then numerous products were reviewed and compared. The latter included not only the initial cost but also looking well beyond, including such issues as the cost and ease of implementation, their longevity, what happens over time in their appearance and structural integrity, history of failures, and costs of repairs as well as future retrofitting. The result ended up with a clear preference that was quite different when compared to their initial thoughts.

Plan For the Future
Of course when planning a redesign of slip layouts one should not only be thinking about the existing fleet, but also in terms of the trends, future flexibility and the ability to accommodate boats that cannot fit into the existing layout. Marinas have a finite footprint of available space. Examining the various approaches to maximize the use of the space is mandatory. Larger boats need deeper water and a wider turning radius than smaller boats. The more large boats the fewer total boats one can place in the same area. But the larger boats can command higher pricing, so one has to examine the net rate of return for various options. Taking advantage of wider navigation channels for turning areas is just one approach to maximizing the efficient use of the in-water area. Many times the use of at least one long dock may be a good answer to accommodating varying sized boats, particularly for a transient market, accepting the trade-off of fewer finger pier slips. Looking at various mixes of layouts and size accommodations is a very worthwhile exercise, which more often than not results in a much more desirable, cost-effective and encompassing design that offers more flexibility than originally contemplated.

Another project which we know of needed to create a new bulkhead. The proper engineering studies were undertaken with specified steel sheets and lengths. To save money the facility decided to go with a lesser quality sheet with a thinner thickness and a shorter length. While the shoreline now has a bulkhead and, to most, bulkheads look the same, the longevity as well as structural stability of this bulkhead has been dramatically compromised, as has the ability to use the immediately adjacent upland area for things like car parking or boat storage. Was the change worth it? Probably not. I do understand that there certainly are times when hard choices have to be made, but too often those choices are made without better understanding the consequences.

As one plans for undertaking most any project a major factor to be considered is the functionality of the design and its components. A simple example is docking facility safety ladders. The function is to have someone who has fallen into the water be able to safely and quickly access a ladder to get out of the water. There are numerous choices and, like most every project or approach, each has its own advantages and disadvantages. Some are fixed and have the steps in the water all the time; some have clips or latches to release the steps to slide into the water; some have steps on top of the dock that swing down into the water; and some have floatation attached to the bottom step that keeps the steps out of the water when not in use but allows the steps to sink into the water by simply pulling down. The goals are common, but their approaches and functionality differ greatly. For us the compelling issue is ease and safe use in times of emergency when one is distressed or panicking.

Those steps that are in the water all the time, while easy enough to access, will typically have fouling organisms such as seaweeds and barnacles attached to the steps making them slippery and/or potentially cut-producing when used. I know I’ve sliced a toe or two open on one of these barnacle encrusted ladders. Was it the end of the world? No, but it wasn’t exactly fun either! Those where you have to release a pin or latch assume clear thinking and take time to engage, again compromising the functionality in times of emergency. And then there are the ladders that have the floatation attached to the bottom step that can be pulled down with one finger, or perhaps even an unscathed toe. As you may have guessed, the latter float ladder is the one we believe is the most functional, especially in times of emergencies. Of course it also is typically about the most expensive. Is it worth it? Well, yes. And it’s not just because it inherently functions better, but by incorporating such a ladder it sends a message to your customers that is worth more than the incremental cost.

There’s an old Kenny Rogers song that goes something like this, “You’ve got to know when to hold ‘em / Know when to fold ‘em / … the secret to survivin’ / Is knowin’ what to throw away / And knowin’ what to keep.” I know it’s not always easy finding that balance, but I also know it’s always worth engaging in a bit of give and take to help get you there!